The posse got together and headed out. They had one chance to save the citizens of the town - if they could make it to the train on time.

Thanks to Dr. Seigal's steam wagon, they made it in the nick of time; the train was plowing along at top speed. After a failed jump, the posse managed to rip up a rope; everyone but Ms. Winston clambered aboard the coal car. Oddly, there was no coal to be found, even though there were two coal cars; Hector suggested the train may be running on ghost rock, same as Dr. Seigal's wagon.

Hector, Ulysses, Ross, and the deputy made their way down the train; after some discussion, it was decided that Hector and Ross would rescue the prisoners, while Ulysses and the deputy would try to stop the train.

The first shotgun-blast to the face neatly removed the zombie's head; it fell to the ground... and then got up again! Abigail boarded the train, and managed to dodge behind the zombie engineer and start throwing levers, knocking him down. A few more shotgun blasts, and the engineer was in small enough pieces to be able to be thrown into the furnace. Which, indeed, contained a solitary piece of ghostrock. After some careful work decoding the controls for the train, Abigail and Ulysses managed to set the engine to full speed, and quickly disembarked.

Back at the rear of the train, Hector and Ross found the prisoners - most of them, anyway. Those that put up a fight were impaled on hooks, hanging from chains; the rest were dumped in piles on the floor. Closing the door, the two managed to decouple the box-car with the prisoners in it, slowing as the rest of the train took off.

However, their troubles weren't over; two of the nosferatu were on board! Hector's thick armor managed to protect him well enough, but Ross took a blow to the guts. The first monster went down, at least temporarily, but the second monster swiped a hole in Ross's insides. Ross fell, never to rise again. Hector quickly finished the second monster, then beheaded the two creatures before they could rise again. He began dragging the dead to one side of the train car, only to find his old friend, Abner Knaggs! Who, of course, was well on his way to transforming into another vampire. A few well-placed bullets fixed that.

After the engine was rigged, those aboard jumped down onto the steam wagon, which turned and headed back to the boxcar. Through the entire episode, the two cars full of sleeping vampires were never wakened; it was as if they went bust on every single roll they made. 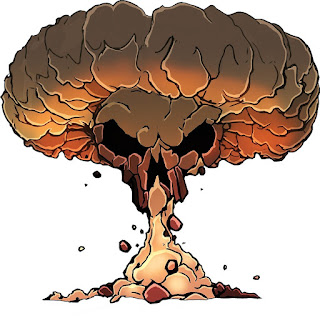 As they were loading the victims onto the wagon, they heard an explosion in the distance - the engine! For a moment, it looked as if dawn came early; whatever was aboard was surely dead.

The trip back to town was slower, but uneventful; upon their return, the deputy made good on his word, and gave them each a reward for the rescued townspeople.

It wasn't long before the posse's own train arrived - but in a condition much the worse for wear! A huge scrape down the side of the engine resembled a giant claw mark; one of the secure box cars was gone (presumably delivered), but the other was grazed by scratches and bullet holes.

The guards were quiet about the damage, but said that they would need to make repairs in Dodge City. They welcomed Abigail aboard, after a bit of confusion when she asked for a room to perform experiments directly after stating she was a doctor. After she explained she was also a chemist, the guard looked relieved, and showed her to her berth.

With the steam wagon back aboard, the train huffed and wheezed, slowly pulling away from the station and heading towards Dodge City. A few miles up, the wreckage of the Night Train was still smoking; apart from a few badly-burned corpses and a lot of twisted metal, nothing salvageable remained. The train cleanly jumped the tracks, fell into a small valley, and burned everything inside a ghostrock-fueled fireball. The engine itself was little more than a pair of wheels.
Posted by Andrew Metzger at 5:00 PM

Email ThisBlogThis!Share to TwitterShare to FacebookShare to Pinterest
Labels: Deadlands