This campaign is based on a strange amalgam of my memories of college, the university as it is now, and the various additions and subtractions required for ETU. As such, I'm sure some of the school will be very recognizable, while other parts... won't be. Or will be if you're an alum. In short: some of the characters are totally real people, or at least caricatures of them!

High school was done, testing was complete, and the incoming students were beginning their first steps into college life. Everything started with an invitation to Heritage Weekend, where students would compete against each other for a pretty decent scholarship.

Alora, Will, and Zac did well enough that they were invited to join the Honors Society! All three accepted. Alistair, jet-lagged from his journey, flubbed his chance. Oh well.

The week before classes began, the students gathered on campus to go through the horrific ordeal that is orientation...

Check-in was a whirl of students, parents, and staff. After the four students filled out the mountain of required forms, they were given a dorm assignment and pointed in the right direction. Zac and Will ended up together in Honors Apartments (11A), along with another freshman Leonard Johnston, and an upperclassman named Jun Han (not present, at least for the first week). Alora was next door in 12B, with her roommate Niki Maslanka, and suite-mates Sarah Murray and Anissa Stevenson. Anissa was the only upperclassman, but being a part of student ministries, she was there early, with the other freshman. Alistair was placed with the other international students in South Hall room 132, and met his roommate Soo-Jin Choi, a Korean student. The students unloaded their belongings and set up their rooms before supper.

After the usual underwhelming parties and overwhelming welcome ceremony, the students managed to get back to their rooms for some much-needed shut-eye.

Friday started with course registration, which is as painful as it sounds. More meetings, lunch, a campus tour that seemed oddly fixated on sports for an engineering school, yet more meetings, supper, and then... game night! Which is where the fun really starts, if the overwhelmingly bubbly student volunteers were to be believed.

The students found themselves organized into the same group - green - and were forced to undergo the usual torture of telling everyone their name, major, where they were from, and one interesting thing about themselves. The horror!

Eventually, they got to the game portion, and were handed a clue for a scavenger hunt. Putting their heads together, Green Group managed to figure out the clues and stay on the right track. Of course, clues aren't everything; they managed to make a wrong turn, and instead of heading the the baseball diamond, went past the Pond towards the maintenance buildings. Realizing their mistake, they cut across on a dirt path. A few of the students happened to catch sight of a figure, standing in a small copse of trees; as they slowed, he freaked out, and dashed out of the trees, shoving them out of the way before jumping over the fence. In the dim light, they could only make out that he was dark-skinned, tall, and very thin.

Excitement aside, their team managed to place first, for which they were rewarded with tickets for free drinks.

Returning to their various floors, they attended their floor meetings - mostly just another "welcome" meeting - and headed to bed.

After sleeping in, the group dragged themselves to yet more meetings, lunch, and the Church Fair. Eventually, the parents and assorted relatives were shooed away, and the students were left to enjoy the "block party", along with the first of the returning students.

Zac and Will heard a pair of young women discussing a strange figure they had seen earlier in the day - a tall, thin, homeless man, talking with another fellow. The two decided they would grab Alora and Alistair and check it out - that, and the location where they saw the man they believed was the same thin man.

After a careful search of the Pond - including hurling in a big rock - the four trekked over to the trees. Alistair found a set of footprints, while Zac and Alora found some disturbed earth. The two began digging, and were soon joined by Will and Alistair. Together, the four managed to uncover a large bone and a paper bag. Alora held the bone up - using the edge of her jacket - and let out a yelp, dropping it. It was a human femur!

Zac tore the bag open with his knife, and uncovered $2000 in hundred dollar bills! The bills were stained with red, though he quickly realized it wasn't blood, but dye, the sort banks use in exploding dye packs. It would seem these bills were stolen...

Will volunteered to hang on to the bone, and the four divided the money between them. Alistair pointed out that there were two sets of footprints: one set from a very worn pair of shoes that came from the direction of the Pond, then continued to the fence (obviously the man that had shoved past them), and a second set that came from the pond as well, then veered off, back towards campus.

After a quick trip to Walmart, they set up a smart camera at the site, hoping to pick up more movement. While they waited, they did a bit of research, and uncovered a recent bank robbery! Called the Valentine's Day Robbery, a trio had robbed a local bank, and made off with $50,000, as well as the contents of several security boxes. One man was ID'd, and there was a photo of him and another man: Jake Busar, a scruffy, chunky, white man, and a tall, thin, black man he called "Maliek." The third man, a getaway driver, got away. Three vehicles were suspected to be the getaway vehicle: a white-panel van, a yellow truck, and a green sports car. A fourth vehicle, a blue truck, was cleared.

After church (or just hanging out in town), the four returned for lunch, then an "all-campus competition". The four managed to stay out of most of the competition, eventually retreating to the BBQ being set up near the Pond. After loading up on food, they met a fellow in overalls (and little else), who introduced himself as Nicky. After a bit of conversation, Alora attempted to push Nicky into the pond; Zac, seeing her attempt, gave a shove of his own. Nicky managed to effortlessly avoid both, saying "Woo! Woo!" and doing a little dance. Zac only just managed to stop Alora from tripping into the brackish pond herself. Of course, Nicky wasn't entirely off the hook; several other guys, laughing, chased him around the pond, and eventually managed to fling him in (though he took someone else with him!). Nicky slopped out of the pond, and started chasing them, attempting to give them a big, muddy hug...

Soon, it was time for a meeting with faculty; each student was given a location for dessert and their first "intro to college" meeting, which would turn into a class. The four happened to be in the same meeting, and soon found themselves standing in the home of a professor, Dr. Glen MacLanahan - "Or GlenMac to my friends! Er, please help yourself to the snacks - I may have, er, overindulged."

He explained that he was a professor of history and humanities, with a special interest in some of the more... unique aspects of East Texas.

A phone call from campus police alerted him to the presence of a strange man on campus - likely a homeless man.

A student, coming back from using the bathroom, asked GlenMac what the equipment in the other room was; the professor replied simply that it was private... which of course sparked the interest of Alora and Alistair. With Alistair running interference, asking GlenMac about his hobbies (which seemed to include various ghost stories, cryptids, and other strange myths and creatures), Alora crept into the other room. Pulling out her phone, she snapped pictures of the various equipment, as well as some cryptic documents on the desk, which she later realized were covered in occult symbols.

Sneaking into the next room, she nearly let a small, white, long-haired terrier loose! It yipped and jumped, and she only just managed to get the door closed and dash into the bathroom before GlenMac walked by. She quickly flushed the toilet and washed her hands; as she exited the toilet, GlenMac walked back past, shaking his head. "I swear that dog knows how to open doors sometimes!"

The group, done for the day, headed home. On the way back to their dorms, Zac and Alora caught sight of someone hanging around in front of the women's dorm; they approached, and when he saw them coming, he took off. Zac was hot on his heels, and Alora took a shortcut to catch up. The man was fast, and lead them on a merry chase, but they eventually cornered him. Realizing he wasn't going to be able to get away, he stopped, and after some questioning, admitted that he was trying to spy on the "girls". Zac let him go with a warning, and he took off.

As Zac and Alora headed back towards their dorms, Zac felt a pinch, and then another - fire ants! He quickly ripped his shirt off, swatting at the bugs, and Alora splashed some water on him to wash them off. Grumbling, he wondered aloud how they could have climbed up his leg and onto his back without biting him anywhere else. Oddly, the stings seemed to be grouped in a strange pattern - a circle with a line through it. 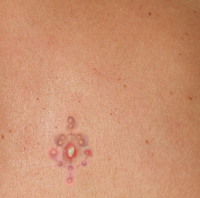 Will, meanwhile, had his own things to do, which he may or may not disclose to the others...

Normally, this is where I would write down XP gained, but ETU is a little different - XP is gained through time, not through actions. Instead, you'll get bennies, items, money, contacts, etc. Speaking of which:
Zac, Alora, and Will each get an extra benny for their scholastic prowess; Zac gets... well, an ant bite; Will (due to undisclosed shenanigans) gains a contact (check your email if you haven't), and Alistair... Alistair needs to stop trying to purchase lethal weapons. C'mon, man, you're 17, nobody is going to risk jail to sell you a gun!
Posted by Andrew Metzger at 5:00 PM

Email ThisBlogThis!Share to TwitterShare to FacebookShare to Pinterest
Labels: ETU